I just flew Spirit Airlines roundtrip from Managua to Ft. Lauderdale. I’ll spare you all my personal review of the airline, but the general public’s opinion is undeniable. They like the prices and hate the service. On the occasion of my return, it was late at night, there was a massive storm barreling across the country, and a Delta flight had earlier in the day skidded off the runway at La Guardia, shuttering the airport for hours. A lot of people were in air travel purgatory that night, and I overheard on more than one occasion “I am never taking Spirit again.”

Airlines, like most companies that offer services, not goods, have high fixed cost. They have to pay their staff and buy and fuel airplanes, whether they are full or not. And any time an airplane is not flying, it is unused capital. Spirit has done an excellent job managing this challenge. By positioning themselves in a South Florida hub, Ft. Lauderdale, they can easily access Central America, the Caribbean, and parts of Central America. Many airlines leave their regional planes at the gate overnight. But Spirit gets them to Ft. Lauderdale, and then sends them on return red-eyes to the Caribbean, Central America, and Colombia. By 6:00 AM planes-full of passengers arrive in Ft. Lauderdale, and either stay in South Florida, or continue on other Spirit flights to their final destinations, whether they be Chicago, New York, Dallas, or elsewhere. Spirit simultaneously tapped what was an under-served market and increased the utilization of their 65 airplanes strong fleet (as of the end of 2014). 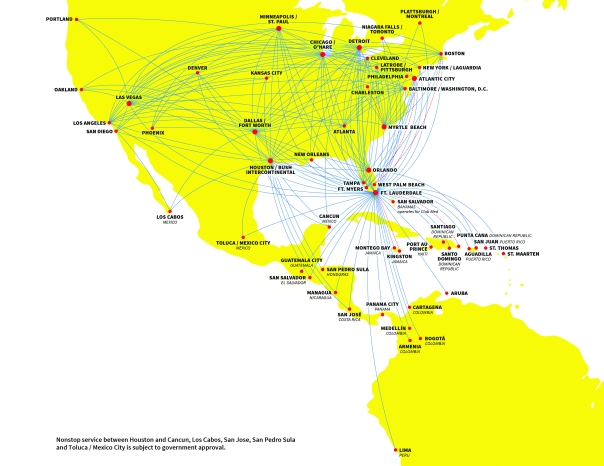 The downside of this is that they have no buffer in their schedule. On the occasion on my flight from Managua, we were nearly an hour delayed. The plane had been getting more and more late throughout the day, having already made a few trips between Ft. Lauderdale and La Guardia before heading to Nicaragua. Then, as soon as we got to Ft. Lauderdale (late) the plane was scheduled to immediately head out to another domestic destination. It certainly departed late, starting off its next day of work on a bad note, and probably continuing late for the foreseeable future. This gives the airline absolutely no buffer in its schedule. Many airlines leave their regional jets idle overnight. So if an airplane scheduled to arrive at its final destination of the day at 10:00 PM doesn’t get there until 11:30 PM, that’s not a problem for its next departure, at 6:00 AM. However, Spirit does not have this luxury with its fleet.

The result: the worst on-time performance among American airlines. 67% of flights land on-time (within 15 minutes of their scheduled arrival time) in 2013. That’s dead last in the United States, Mexico, and Canada, according to Bloomberg.

Many people complain about how Spirit “nickles and dimes” its passengers. But truly, travelers who are honest about their baggage and pay ahead of time will find themselves paying less for flights than on other major carriers. The true cost comes in late arrivals. For someone with a tight itinerary, Spirit may not be the right choice.